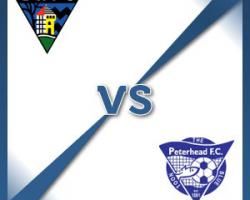 Dunfermline V Peterhead - view commentary, squad, and statistics of the game live.Pars release duoDunfermline have released Gozie Ugwu and Sorel Chemin while plans to have Jim Paterson on board to face Peterhead at East End Park have been put on ice until next week.Ryan Williamson remains out with a knee injury as manager John Potter looks to end a frustrating fortnight with a win.Potter said: "After playing so well against Stranraer in my first game in charge only to lose we were really keen to get going at Brechin last weekend however it was called off."We had a friendly arranged for earlier this week however that was postponed as well so we are really looking forward to playing Peterhead."Peterhead include Mark Millar in their line-up for the last time before his short-term deal runs out.Manager Jim McInally is only missing Ryan McCann and Dean Richardson, who are short of match practice after injury.The last time the Blue Toon played at East End Park they had three men sent off before half-time and McInally is keen to avoid a repeat.He said: "It was a bizarre afternoon where we eventually lost 3-0

Dunfermline are the best team in the league and if we are to do anything in this game then we have to keep everyone on the park."